Skip to content
Press Enter / Return to begin your search.

John Mitchell is a painter in what is today considered “the traditional mold”— undergraduate at Chicago Art Institute and graduate study at Yale. We worked in studios just down the hall from one another 18 years ago at Yale. Today I am sitting for a portrait in his studio, on average about twice per month, for just shy of two years.

You have mainly worked observationally in your large oil paintings. In grad school when you wanted to paint about transformation, you wore a werewolf mask and painted in the mirror. Like a method painter, you told us you *were* a werewolf. When I first reconnected with you in New York, you were working on fantastical scenes of alien worlds, but in order to realize them, you painstakingly created them in real life, first with lengthy stories and then methodical set building and labor-intensive construction of the alien beings. Tell us how you returned to painting the figure. The human one…
Some of the first painting courses I took in undergrad at The School of the Art Institute of Chicago were figure-painting courses. I think those first paintings I made of people were pretty good. I still like to look at them. Then one day I had an intense feeling of anxiety and claustrophobia while looking at The Crucifixion by Zurbaran in the museum. While looking at it, I became aware of it as a painting of an anonymous Spanish man playing the role of a crucified Jesus—forever trapped in all that black as though he was an alien buried alive in a time capsule hurling through time and space. That was in early 1994. I couldn’t paint people after that. When I would try, that feeling of anxiety and claustrophobia would creep up and overwhelm me and I couldn’t get around it.

In June 2014, I decided to take a break from the alien paintings I’d been working on for 10 years. I went outside and started working on a 30 x 90” painting of the Brooklyn waterfront and the 3 bridges from underneath and just north of the Brooklyn Bridge. One day while working on that painting, a tough looking homeless guy interrupted with compliments about the painting in progress saying, “You’re a really great artist man! I’m an artist too. I do tattoos. See, I did all of these myself while I was in prison!” And he held out his tattooed arms. I asked, “What do you use to make a tattoo with in prison?” He said, “A piece of metal guitar wire.” I said, “You must have been in prison for a long time because you have a lot of tattoos.” He said, “Yea man, 20 years. I just got out two months ago. I killed a guy. Actually, I killed 7 people but I got caught for one and so I had a body. So I had to do 20 years.” Then he asked, “Hey man, will you paint my portrait?”

Time slowed down in that moment. My mind was racing. I thought about the anonymous man trapped in Zurbaran’s Chicago Crucifixion, I wondered whether I would still feel blocked by anxiety and/or claustrophobia if I tried painting a person, how this guy was an ex-con and a murderer, that he probably had psychological problems and might be very unpredictable, that he was desperate and trying to hustle me—and then I said, “Yes!” and I instantly felt that I really wanted to try painting him. I even offered to pay him $10 per hour to stand for a portrait. Over the next 5 Sundays, we spent two hours per session working together down by the East River under the Brooklyn Bridge and it was so exciting. I realized that all of these ideas that I had developed between 1994 and 2014 about color, surface, composition, and technique could be used to make a painting of a person that wouldn’t look like any painting of a person that I had ever seen before. Plus—I think I felt comfortable painting this guy because he was used to incarceration but he was also just so enthusiastic. I didn’t feel the slightest bit anxious or claustrophobic. At least I was helping him by paying him and we were working down there under the Brooklyn Bridge where the space and light feel so vast. After I made that painting, I couldn’t wait to try making more paintings of people. 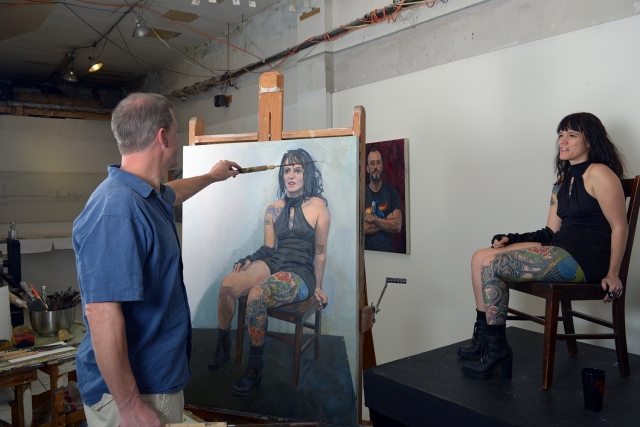 Wow. I was particularly excited about that ex-con painting when you were working on it. I thought it was just because of the edginess of the subject, but no doubt it was your own excitement at rediscovering the figure, coming through in the painting. Did any of your other subjects choose you, or do you usually choose them? What is it you are looking for in a sitter?
It can go either way. Sometimes people ask and sometimes I ask. I only work directly from life, so there are practical considerations. The person or people that I’m working with should live close enough to my studio in Williamsburg, Brooklyn that we’re able to work on a regular basis for however long it takes. It also helps if they’re enthusiastic about the process and it’s important that they’re dependable. Outside of that—I feel that my overall body of paintings, drawings, and prints of people should be representative of the diverse spectrum of people who populate the world around me.

Like a ride on the L train, I think I have heard you say. Is life in New York City just as much the subject, as the sitters themselves?
Yes. 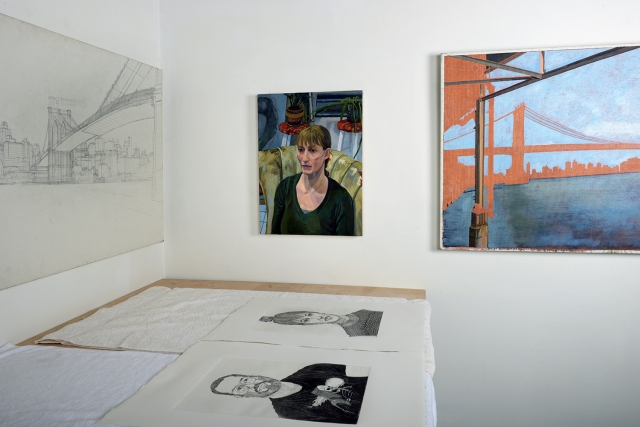 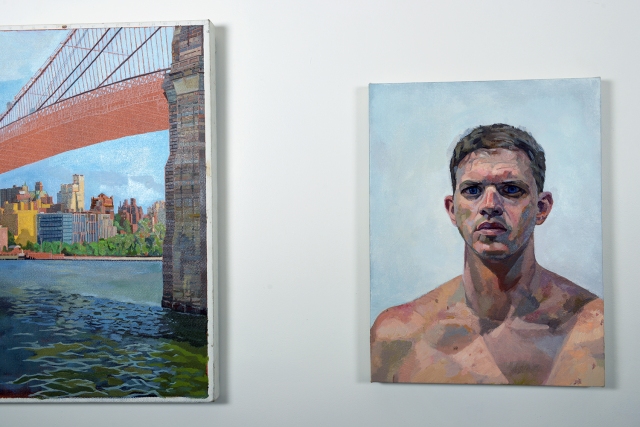 You do become very involved in the world of your sitter, though. Talk about your process in making these portraits over a long period of time.
I do one session per day every day of the week. Sessions last from 3 to 6 hours and sometimes more. I’m currently at work on 7 paintings—Kym Moon on Tuesdays, Garrett Swann on Wednesdays, and so on—and I work with each person week after week on their day for as long as it takes. In the time between each session I spend a lot of time looking at and thinking about the painting. I even make drawings, etchings, and small paintings from the bigger primary paintings in progress. 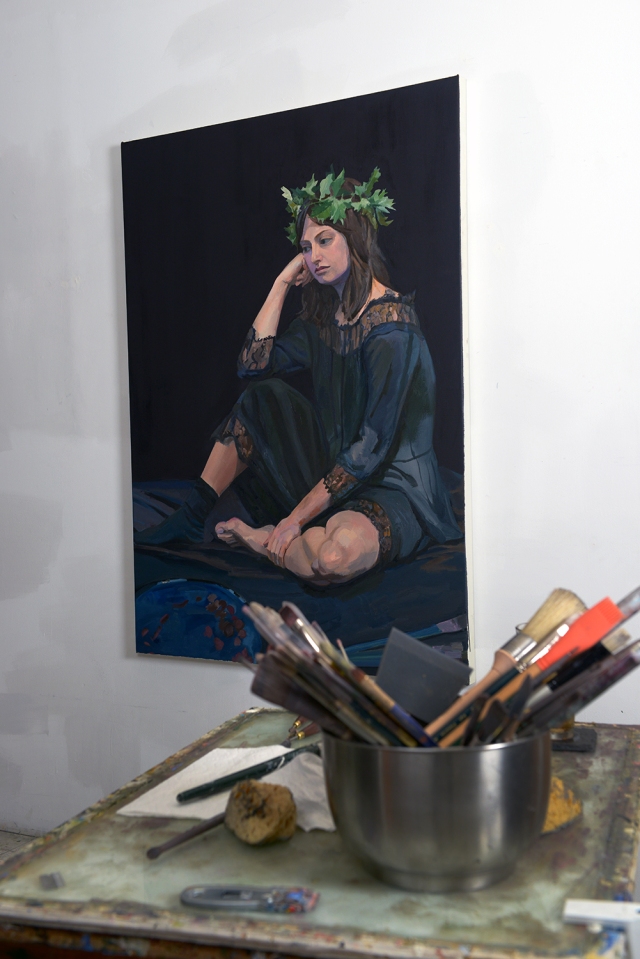 When the sitter is present, I focus all attention on that person or on Mondays—those two people. My Monday painting in progress is a double portrait of a couple whose names are Pepper and Riff. The other six paintings in progress are all of individuals. I strive to make a nice environment for the models. I want them to enjoy the experience and so far, everyone I’ve worked with has said that they do or did enjoy the process.

My paintings are not photographic and they’re not perfect representations of the way something looks in real life. They rely on the organic process of seeing and my ability to make a painting— both of which are riddled with imperfection. For example—when I’m concentrated on one area in my field of vision, strange things happen visually. Floating colors that aren’t physically present begin to appear in the periphery or I’ll see floating spots. People move during sessions and change from session to session and I do too. All of that information is subject for use in the painting but I intentionally leave things out too. In the end, I want the painting to feel alive. The whole thing has to work in unison and the paint should be exciting to look at.

View all posts by cheapandplastique