Skip to content
Press Enter / Return to begin your search.

Everest and I attended graduate school at Yale at the same time, so I have been a long time fan of his painterly mastery. Your work at that time was very painstaking and slow. How would you describe the way your process has evolved?
When I was a younger man I was really obsessed with the idea of being a great artist who made masterworks that were admired by a large public. Craftsmanship on a high level will always inspire admiration and I worked tirelessly for years to develop the skills for that admiration. As I developed, painting became a much more private exploration and I cared less and less about anyone else’s opinion. These days in the studio I use rendering and craftmanship as part of the larger language of the painting that is equal to any other way of working. A painting will have tight, finely drawn areas juxtaposed with thick swaths of bravado. I feel working like this is closer to how one interacts with the physical plane. Detailed vision of the physical combined with emotion and imagination.

Do these changes have something to do with your subject matter, or the way you feel about painting in general?
For a long time I was fixated on the physical nature of an art object, I considered the works from 1997 ‘til 2012 to be on the border of sculpture and painting. I purposely made finely crafted jewel like works at an intimate size that could be handled… put on a desk, tucked under the arm. The amount of focus put into those works and the size gave them a form of cross dimensionality. Somewhere between a physical object and a mental space. In 2012 my studio was flooded by hurricane Sandy. Many works were damaged by the floodwaters. The storm had a deep effect on me and the way I work. As I was sifting through the damaged works I really grew to appreciate how the works were changed and activated by disaster. Speed, bravado, and carelessness became part of my tool box after the flood. The physical painting is still very important but I no longer fixate on its permanence.

What inspires you to make work?
As ridiculous as it sounds, I will actually have an idea flash into my head .. Boom! Sometimes it’s a feeling that I need to think about and name—other times it’s a fully realized image; words and phrases will roll around in my head as well. I write them down and think about them, sometimes for awhile. My mind is so active I have to really filter out what i am interested in and what is noise. Let’s say I am thinking about a color like pink. I will obsess on the idea of pink for a long time, imagining as many pink possibilities and relationships as I can. Eventualy I will move onto another idea and put pink in the back of my head for a bit. After a while I will see a flower or a vase or a piece of fabric in pink and because I have concentrated so hard on pink a flood of ideas come to me. I now have a foundation to build off of. The pink flower will remind me of a sexual organ, perhaps, so I will add an element to the painting that enhances that… perhaps black lace or white cotton.

Your live/work space is full of strange and wonderful objects that clearly have some kind of symbolic or spiritual significance. Can you talk about how these objects make their way into your work, and what they mean?
Thank you for noticing how awesome my things are. Everything is alive… any object is made from a group of vibrating atoms and is only solid because our minds understand it to be so. We name these groups of atoms rock, flower, skull, and with these names come a massive amount of attached associations and energy. Any object can be magical if a strong belief is put onto it, just ask a child… over the years though I have aquired several very magical objects. My crystal skull is probably the most obvious. She is a gorgeous piece of clear quartz crystal and when I paint her I embed the object with her energy. 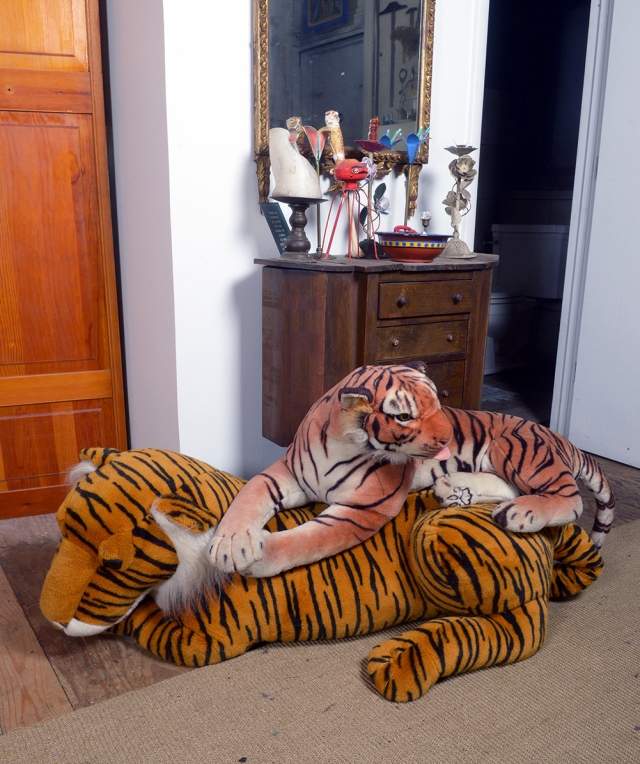 You grew up in upstate New York, in a home where your parents ran a ceramics studio (called Cumulus Cloud Forms) from the garage. Do you think growing up in this “hippie house,” as you referred it in one of your Instagram videos, influenced your decision to become an artist? Have you ever worked with ceramics in your fine art practice?
Of course! My family very much encouraged me to be an artist. I played a lot in the ceramics studio when I was a kid… I have had a few ideas over the years for objects in clay but they are always put to the side because of painting’s prime importance to me.

Speaking of your Instagram videos (and Everest DIY on YouTube), I really love them, they are always uplifting and rather funny, whether you are ruminating on the meaning of beauty, telling the story of the first time you saw a dead body, or instructing the viewer in a mocktail tutorial. Why did you start making these video pieces?
The message of Everest DIY is one of questioning… to question the way everything is done and to Do It Yourself. I highlight various common tasks, ideas, and objects from a different personal lens. The Air Taco video is a good example… One day I caught myself eating slices of white bread folded in half. I was low on food and money and realized if I ate a slice of bread every 15 min or so I wouldn’t be hungry. What a weird thing to do! This would be interesting as a cooking show. I keep the subjects of the videos rather random—everything from cooking to philosophy to home crafts.

Is there a relationship between yourself on camera and yourself in the self portraits you have made recently?
The new self portraits are so new it’s early to talk in depth about them, but basicly I am painting myself in profile with elements working with and against the portrait. The formal side view of a head makes it more of a symbol my “me” the elements working with and against the profile could be the physical state. Photography in social media is very self referential and has a collective bonding effect. I play a bit in this area by acting the Stud roll but arrange the picture in a way that something is off and repellent. I look for authenticity in the guise of editorial. I will prance around half naked for instagram but to illustrate an alternative way of being rather then being acceptable.

Tell us what a typical day in the studio might entail.
I’m in the studio a lot these days and have the pleasure of being in my personal space and letting my mind drift. I wake up early and usually get into the studio about 9 am, have coffee do some writing, and make a list of what I want to accomplish that day. Usually my day breaks down into a group of 3. Physical activity like clean the studio, work out or build something. Mental activity is second—this is when I am painting, drawing or doing anything that really needs concentration. At the end of the day I work on all of my new projects, experiments, and odd ball ideas… I find I’m super loose at the end of the day. Studio days tend to be very long with me working until I go to sleep.

What could you imagine doing if you were not an artist?
This is a hard one, I identify so much as an artist… thinking about how my mind works and the way I relate to people I feel I would have been a great homicide detective or astrologer or perhaps a scientist studying viruses. Whatever it would be it would need to be interesting where I could use my mind and help people.

View all posts by cheapandplastique